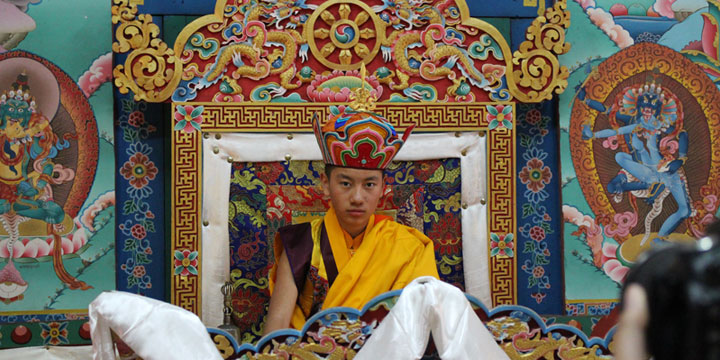 From the time of the prevailing of the Buddha Dharma to the existing moment in time, there are number of unbroken succession of great Buddhas and Bodhisattvas have been attained enlightenment, and tirelessly devoted themselves full-time to their beneficial activities to other sentient beings that lead to achieve final realisation. In Buddhist tradition, there is a well-known belief in recognising the reincarnations of great Buddhas and Bodhisattvas such as Buddha and his reincarnations, Guru Rinpoche and his reincarnations known as Truelkus and many. They purposely take rebirth, out of control for themselves, out of compassion for sentient beings, and to continue their on-going activities from one's previous incarnations. Thus, H.E. Truelku Ugyen Drodrul Thinley Kunchap Rinpoche is one of such reincarnations and has been taking number of rebirths and unbroken Terton (treasure revealers) lineages. Moreover, Guru Padmasambhava is the revered Buddhist saint who turned the Wheel of the Dharma by instilling and teaching higher Mahayana teachings and the secret Vajrayana or tantric teachings. Guru Padmasambhava travelled and taught throughout India, Nepal, Tibet and Bhutan. Due to his miraculous powers, Guru Padmasambhava also subdued inauspicious conditions and obstacles that could harm or threaten the anchoring and propagation of the Buddhadharma in this world. Guru Padmasambhava revealed and taught many sacred teachings that were preserved in texts and also gave many treasures.

Through his perfect meditative vision, Guru Padmasambhava was able to see and predict when in the future the Buddhadharma would be in danger or threatened by harmful conditions and circumstances. To further protect and strengthen the Buddhadharma, Guru Padmasambhava buried many sacred texts and treasures in various places of the Himalayas that would be discovered and revealed in the future by treasure revealers also known as Tertons. These sacred texts and treasures would be revealed at certain times by Tertons to alleviate a threat to the Buddhadharma, remedy inauspicious circumstances, or reinforce the strength of the Buddhadharma in difficult or degenerate times. Tertons reveal these sacred texts or treasures by finding the physical place in which they are entombed or through dreams, meditative visions, and spontaneous realization.